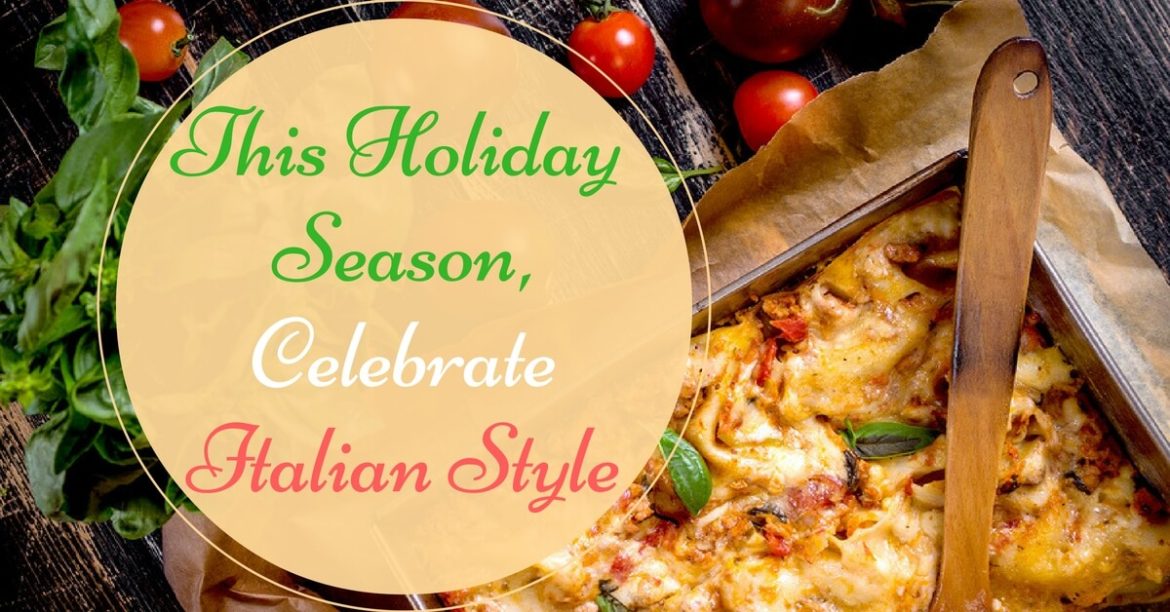 Last year, we explored the many different winter holiday celebrations traditional to Italy. December is a month full of feasts, rooted in religious tradition. Christmas celebrations in Italy usually begin over a week before the actual day of Christmas (December 25). It will last until the Feast of Epiphany, which usually takes place in early January, after the new year.

The question is, what do Italians traditionally eat during this month of holidays?

In the 24 hours before Christmas, Italians tend to observe a strict fast. At Christmas dinner, Italians around the country have diverse centerpieces, depending on the region. According to Giovani Ballarini, president of the Academy of Italian Cuisine, “Everyone interprets the ‘rules’ of Christmas dinner in their own way. The first course is either broth or pasta, followed by a second course generally based on meat or fish, followed by dessert.”

In the cold northern reaches of Italy, you’ll find a delicious filling soup in the Emilia-Romagna region. Here, tortellini is served in a hot, herb broth. Homemade egg pasta wraps bits of meat filling for a heartwarming holiday feast. Also in the north, you’ll find a hearty Brovada e muset in the Friuli Venezia Giulia region, showing its eastern European influences. This winter dish is made of pickled turnips and pork sausage.

Meat and vegetables are a classic combination of Italian holiday cooking. In regions such as Lazio, you’ll find roasted lamb and potatoes, and in Lombardy, Cappone ripieno, or capon stuffed with meat, egg, cheese, and mortadella. This roasted bird is usually accompanied with a candied-fruit condiment – not unlike cranberry sauce at an American Thanksgiving! Up in the northwest of Italy, Piedmont’s Christmas will feature another hearty meat: in this case, you’ll find boiled ox served with a series of sauces, paired perfectly with Piedmont’s famous wines. Nearby, in the Aosta Valley, the French-influenced Carbonata (Beef in red wine sauce) is a filling feast of marinated beef and lardon.

Heading to the central region, you’ll be familiar the lasagna traditional to a Christmas feast in Marche, on the eastern coast of Italy. Here, the Christmas baked lasagna combines ground beef, sausage, chicken, and cured ham. In Umbria, also in the central region, a stuffed pasta soup called Cappelletti ripieni is reminiscent of tortellini – except this soup uses capon as its filling.

In Southern Italy, Abruzzo Christmases are celebrated with Minestra di Cardi, a soup of cardoons (a type of artichoke), cooked in chicken broth and little meatballs. Minestra di cardi showcases the Mediterranean influences on cuisine in Abruzzo. Nutmeg gives this soup a particularly Christmassy taste. Also in Southern Italy, another soup is a favorite at the Christmas table – Minestra Maritata (“married soup”). This hearty soup has a base of capon bth, with eggs beaten in and topped with hot pepper and bits of veal.

Basilicata, another region in South Italy that borders the sea, Baccala con Peperoni Cruschi (cod with sundried bell peppers) is a favorite at the Christmas table. Cod figures prominently in another southern region, Molise. Breaded cod with garlic, parsley, raisins, and pine nuts is at the center of this region’s Christmas celebration. Surprisingly, cod is found in Veneto’s Christmas feast – though Veneto is way up north! Here, you’ll find Polenta e baccala, seasoned cod that sits atop polenta squares, garnished with fresh herbs. Back down south, in Puglia, another seafood is featured in the Christmas feast, with Capitone alla brace (grilled eel).

Calabria, at the tip of Italy’s “boot,” offers up a skinny pasta called fileja, served with a hearty, tomato-based pork sauce. Other region to feature pastas in their Christmas feasts include Sicily, with the famous Timballo di pasta al forno, the drum-shaped baked pasta dish. Sardinia offers up a fresh and filling home-style ravioli, stuffed with fresh sheep cheese, chard, nutmeg, and saffron.

This Christmas, if you want to treat your loved ones to fine Italian dining for the holiday feast, make a reservation with us at Cucina Toscana! Brave that Salt Lake City cold and come in for some of our favorite selections from the Chef’s Kitchen. Our signature lasagna classica alla Bolognese is a favorite, with handmade pasta, parmesan, veal, and beef. For seafood lovers, we offer Pesce al forno con porcini e piselli, a season stew of fish, clams, shrimp, and peas.

From all of us at Cucina Toscana, we wish you a happy holiday season and hope to see you for Christmas dinner!