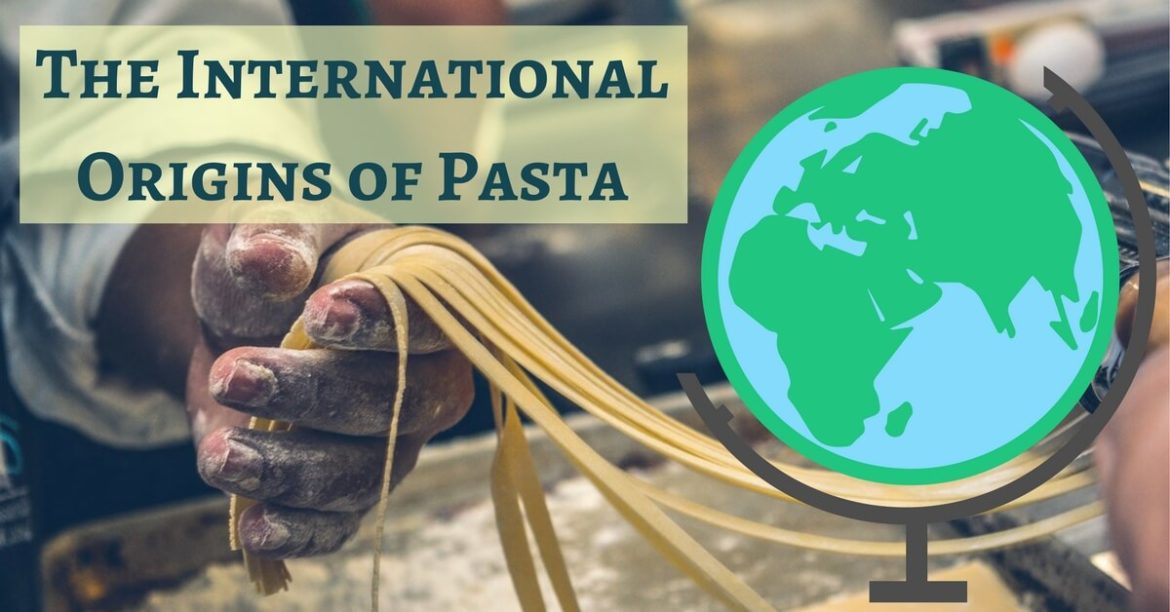 There’s no denying that pasta is decidedly Italian. However, as is common with well-loved world cuisines, the origins of pasta are highly contested and may be found in many intersections of time and place. As Tori Avey writes in The History Kitchen, “The history of pasta is difficult to trace for several reasons. The word itself translates to ‘paste’ in Italian. This is a reference to the dough, made from a combination of flour and water or eggs – all simple components that have been around for centuries. This makes it hard to differentiate pasta from other ancient dishes made from the same ingredients. In addition, since pasta has long been a food of the common people, it has not received as much attention as more extravagant foods.”

Today, we travel back in time – and around the world – to take a look at the possible origins of pasta. [/cs_text][x_custom_headline level=”h2″ looks_like=”h4″ accent=”false”]The Marco Polo Legend[/x_custom_headline][cs_text]The most common – and as many historians argue, quite inaccurate – story about pasta is attributed to the legendary traveler Marco Polo. Noodles existed in China and Asia long before pasta appeared in the Mediterranean world, and the legend goes that Marco Polo brought pasta to Italy from China in the 13th century. Apparently, there are passages in The Travels of Marco Polo (by Marco Polo, of course) that refer to “pasta-like dishes.”

At the same time, historians note that Marco Polo’s familiarity with the food “pasta” suggests that it was already in existence, and he simply gave it a name. Food historian Harold McGee writes in his book, On Food and Cooking: “It’s a story often told, and often refuted, that the medieval traveler Marco Polo found noodles in China and introduced them to Italy. A recent book by Silvano Serventi and Francoise Sabban has set the record straight in authoritative and fascinating detail. China was indeed the first country to develop the art of noodle making, but there were pastas in the Mediterranean world long before Marco Polo.”
[/cs_text][x_custom_headline level=”h2″ looks_like=”h4″ accent=”false”]Early References to “Pasta”[/x_custom_headline][cs_text]While it’s highly unlikely that Marco Polo brought pasta to Italy, it is believed that pasta as we know it made its way westward from Asia at an earlier time, perhaps by nomadic Arab traders. According to Culinary Lore, “There are written reports of ‘a food made from flour in the form of strings,’ in Sicily, described by an Arab trader named Idrisi in 1154, well before Marco Polo’s travels. There were even noodles called rishta in the Middle East, a food of Persian origin. Also, at the Spaghetti Museum in Pontedassio, Imperia, there are several documents from 1240, 1279, and 1284 which refer to pasta, maccheroni, and vermicelli as known foods, well before Marco Polo’s return in 1292.”

Furthermore, it is suggested that rishta became popular in Sicily, due to the high number of Arab traders on the island. It is believed that rishta came to Italy via the Silk Road, the well-worn trading path from Asia to Europe. [/cs_text][x_custom_headline level=”h2″ looks_like=”h4″ accent=”false”]The Art of Noodles in China
[/x_custom_headline][cs_text]Long, long before pasta was a twinkle in the eye of Italy, some time before 200 BCE, the northern Chinese were already developing the art of noodle making. References to noodles and dumplings (precursors for ravioli perhaps?) appear throughout historical Chinese texts, such as an ode from 300 CE by Shu Xi (McGee notes that “poets frequently likened their appearance and texture to the qualities of silk”) and in a 544 CE document that outlines a number of flour-products, including wheat noodles.

Though noodles – mian or mien in Chinese (hence lo mien) – began as a dish reserved for upper classes in northern China, over time they became a popular food among working classes. By the 7th or 8th century, McGee writes that noodles made their way to Japan, where they are called men (hence, ramen). [/cs_text][x_custom_headline level=”h2″ looks_like=”h4″ accent=”false”]Pasta in the Middle East & Mediterranean[/x_custom_headline][cs_text]In the 9th century, a Syrian text mentions itriya, dough that is shaped into strings and dried. Could this be a precursor to Sophia Loren’s spaghetti? Later, in 11th century Paris, the term vermicelli (with verm from Latin for worm) was used to describe very thin pastas. In the 13th century, macaroni was first used to describe “various shapes, from flat to lumpy.”

During the medieval period, “cooks made some pastas from fermented doughs; they cooked pasta for an hour or more until it was very moist or soft; they frequently paired it with cheese, and used it to wrap around fillings” (McGee). [/cs_text][x_custom_headline level=”h2″ looks_like=”h4″ accent=”false”]Pasta in Italy
[/x_custom_headline][cs_text]Though pasta’s origins are varied and can be traced to different parts of the world, it is widely agreed that the evolution of pasta into the form we now know and love was perfected in the post-medieval period in Italy. McGee writes, “Pasta makers formed guilds and made fresh types from soft wheat flour throughout Italy, dried types from durum semolina in the south and in Sicily. Italian cooks developed the distinctive preparation called pastaciutta, or ‘dry pasta,’ pasta served as the main component of a dish, moistened with sauce but not drowning in it or dispersed in a soup or stew.”

By the 18th century, pasta was widely produced throughout Italy and was a common food amongst all classes of society. In the late 19th century, the term al dente – to the tooth – was first used to describe the perfect texture for pasta.

Here at Cucina Toscana, we are proud to serve authentic Italian pasta dishes! Visit us for a taste of history.[/cs_text][/cs_column][/cs_row][/cs_section]