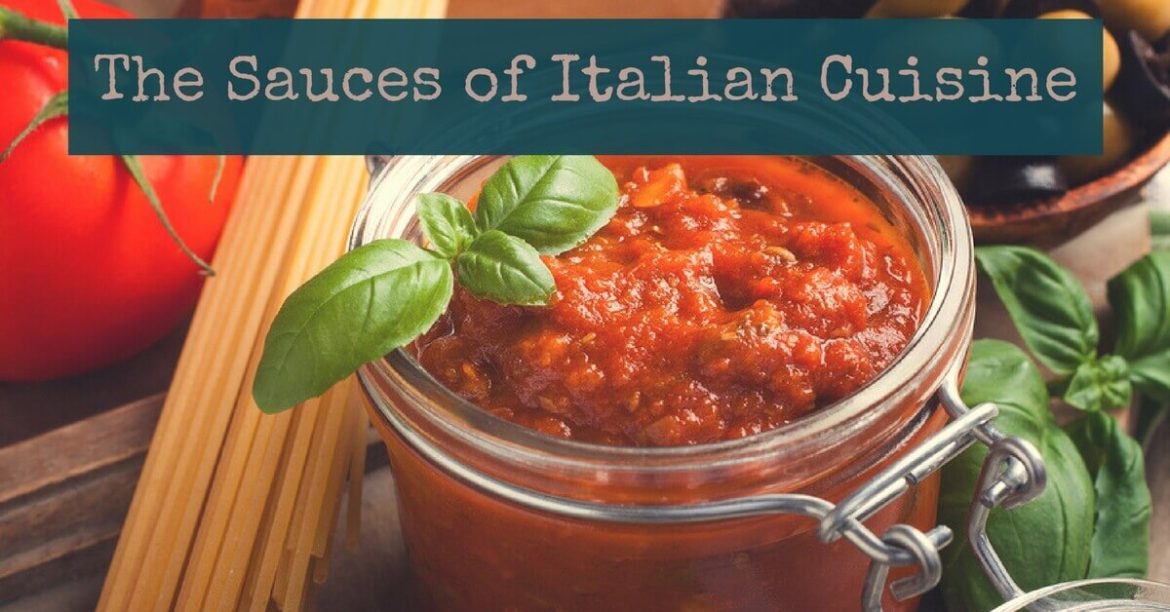 Who was it that said “hunger is the best sauce”? It has been attributed to Socrates or Cicero or Miguel de Cervantes – whoever it was, they had the right idea! This is especially the case in Italian cuisine, where it’s easy enough to cook up a pasta – but it’s the sauce that makes all of the difference.
“In the Italian kitchen,” says famed Italian chef Marcella Hazan, “ingredients are not treated as promising but untutored elements that need to be corrected through long and intricate manipulation and refined by the ultimate polish of a sauce.”

The History of Sauce

The etymology of “sauce” lies in the Latin word salsa, which means “salted.” Across world cuisines, sauce tends to contain an element of salt – from the ancient fish sauce garum of the Mediterranean world to doubanjiang, a soybean paste from China.
Regardless of the cuisine, sauces tend to have liquids and in some cases, solid components as well. The ratio though, tends to be more liquid to solid. Sauces may be served in many different temperatures, from a cold mayonnaise to a lukewarm pesto to a warm tomato sauce.
In the traditional kitchen formation, there is a role dedicated to sauce-making. This individual, whose job is to prepare sauces and soups, is known as the saucier.

The sauces of Italy reflect the diversity of regional cuisine across the country.

Besciamella, from Tuscany and Emilia-Romagna, is better known as one of the mother sauces of French cuisine, Bechamel. But did you know that this sauce actually has its origins in Italy? It first appeared in an Italian cookbook, and was adapted for the French court of King Louis XIV by Francois Pierre La Varienne, a chef de cuisine of a famous marquis. Besciamella is a white sauce and consists of a white roux (butter and flour), infused with bay leaf, peppercorn, shallot, and parsley.

From the Piedmont region, the sauce Bagna cauda is more of a dip than sauce. Bagna cauda, which means “wet” and “hot,” is similar to a fondue. It is prepared with garlic, anchovies, olive oil, butter, and cream. Other flavorings include truffle, walnut oil, or hazelnut oil. Bagna cauda accompanies raw, boiled, or roasted vegetables during the autumn and winter – traditionally carrot, fennel, celery, cauliflower, artichokes, and onions.

One of the more famous sauces for meats is marsala, which is actually an Italian-American creation! Marsala sauce made of Marsala wine, and is a variation of scaloppina dishes. In traditional Italian cooking, scaloppini is a thin slice of meat, often breaded and then sautéed and topped with a simple wine-reduced sauce. It is believed that the Italian-American marsala sauce was created by Sicilian families in the 19th century. Here at Cucina Toscana, it is served with chicken breast, button and oyster mushrooms, and garlic.

Ragu alla Bolognese is perhaps one of the most famous pasta sauces from Italy. At Cucina Toscana, it is served with our classic lasagne. Bolognese sauce is a meat-based sauce derived from Bologna, Italy. It is a slowly cooked sauce that requires several different techniques, from sautéing to braising. To finish off the sauce, red wine and tomatoes are added, and it is simmered to become thick and rich in texture. Bolognese sauce is versatile, and can be served over many different forms of pasta and baked into lasagne.
Another popular sauce is Carbonara, which comes from Rome. This decadent sauce is made of eggs, cheese, bacon, and black pepper, and is a newer sauce – created in the middle 20th century. It is believed that the heaviness of this sauce was created to keep coal miners – carbonaro – full for a long, hard day of labor. The origins of this sauce, though, go back into Italian history with predecessors such as spaghetti alla gricia (bacon, cheese and pepper), and cacio e uova (melted lard and mixed eggs with cheese). Try Carbonara on spaghetti at Cucina Toscana!
A classic, simple tomato sauce is always a perennial favorite to top pasta. Tomato sauce may sound run-of-the-mill, but in reality, there are many ways to spruce it up. Marcella Hazan’s classic tomato sauce is made of a 28 oz. can of whole peeled tomatoes, 1 onion, and 1 stick of butter, seasoned to taste. When simmered long enough, it becomes a silky and satisfying topping for any al dente pasta.

At Cucina Toscana, you’ll find variations of tomato sauce on many of our dishes, from gnocchi to the fresh catch of the day to chicken with prosciutto.
Don’t let hunger be your only sauce! Join us for a meal with our favorite sauces at Cucina Toscana.