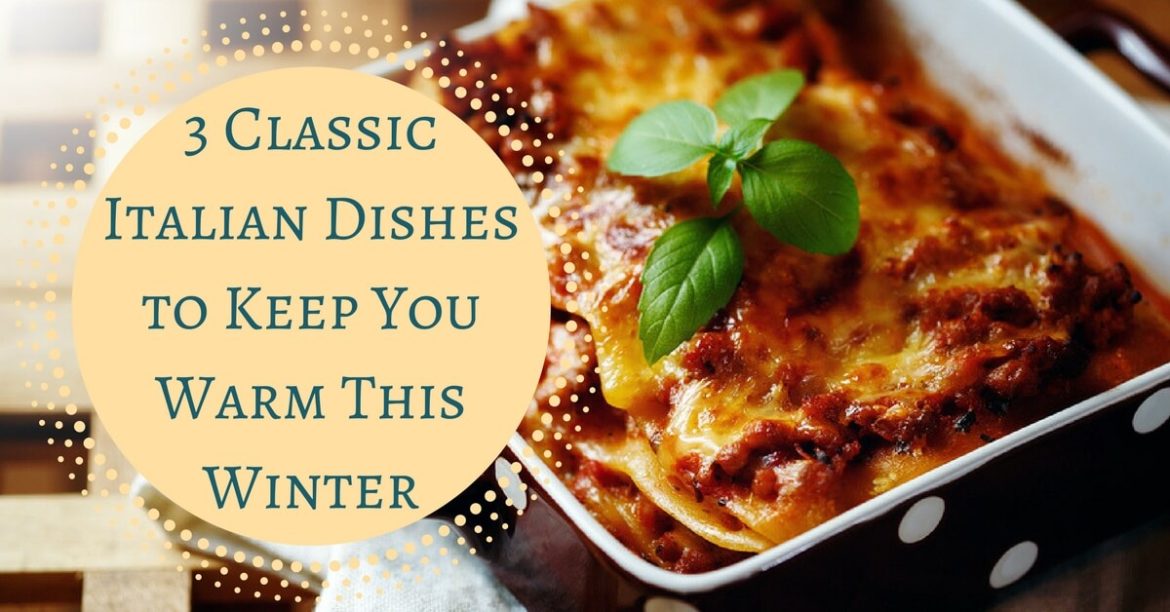 The northern regions of Italy are relatively cool compared to the rest of the country, while the southern part of the peninsula tend to fit more of the Mediterranean climate profile. The two coasts of Italy experience different climates in winter time, with the west coast wetter and warmer, while the east colder and drier. In winter, the eastern coast of Italy tends to be harsh with cold, but with bright blue skies.

Cold spells and snowfalls are common in the northern part of Italy, which abuts France, Germany, and Austria. Snow may fall in certain eastern cities, while ones in the west experience winter rain. January is the coldest month nationwide, with temperatures ranging from lows of -22 degrees Fahrenheit to 36 degrees Fahrenheit. Urban areas tend to be warmer in winter. Up north, mountainous areas may experience heavier snowfalls come February.

As with most cuisines of the area, Italy adapts its dishes to the availability of produce and to the meteorology of the region. Whether it is a damp or dry cold, Italy’s winter dishes have found a place in the United States, where it ranks as one of the top comfort foods in the coldest months.

In Salt Lake City, our winters tend to mirror the northern, mountainous regions of Italy, with colder temperatures and snowfalls. Today, we offer you five favorite Italian dishes to keep you warm this winter.

Soup is the go-to winter dish – immediately warming us up, while still leaving room for the meal ahead. Right now, at Cucina Toscana, we offer a spot of brightness with our zuppa di asparagi, a soup of asparagus with zucchini and truffle oil.

Asparagus has a long history across different world cuisines, dating back as early as 3000 BC in an Egyptian frieze. Ancient Romans enjoyed asparagus during the summer months, and those who lived in colder climates, would “freeze” asparagus in the Alps to save for the Feast of Epicurus!

An early recipe for asparagus appeared in an Ancient Roman cookbook by Apicius, and Emperor Augustus coined the phrase “faster than cooking asparagus,” as the vegetable only requires a short period of cooking.

Bolognese sauce comes from Bologna, Italy, in the central northern region of the country. It is a form of ragu, a meat-based sauce that is compatible with many different pasta preparations. Traditionally, Bolognese sauce is a labor of love, requiring a slow cook for the perfect caramelization of its components. Bolognese is composed of onion, celery, and carrot, along with beef and veal, red wine, and tomatoes. Simmered over low heat, Bolognese becomes a thick, hearty sauce.

Lasagna is the name of both a pasta and a dish! The pasta lasagne is one of the oldest forms of pasta – a simple, flat wide sheet. It is said that the pasta lasagna originated in Naples, where it appeared in a recipe found in Liber de Coquina, a cookbook from the Middle Ages. In this recipe, sheets of lasagne were layered with a ragu, and a variety of different toppings from meat to chicken to vegetables to garlic to various kinds of cheeses.

Almost everyone has eaten a classic lasagna with Bolognese sauce – but have you had ours yet? At Cucina Toscana, our la lasagna classica alla Bolognese is made with layers of handmade pasta, stuffed with veal and beef Bolognese sauce, and topped with parmesan. This favorite comfort food is layers of gooey and saucy goodness – perfect for a cold Salt Lake City evening.

Ossobuco is a casserole dish that originated in Milan and now is found in various regions of Italy; here at Cucina Toscana, ours inspired by the northwestern region of Piedmont. Ossobuco’s name comes from the Italian osso buco, meaning “bone with a hole.” This refers to the cut of meat traditionally used for the dish – a veal shank with a marrow hole in the middle.

Ossobuco, as with all great culinary creations, is a dish of the “lower classes,” as the cut of meat was not very pricey. There are two versions of the dish ossobuco. In the traditional preparation, ossobuco in bianco, the veal shank is prepared with cinnamon, bay leaf, and gremolata (a combination of lemon zest, parsley, and garlic). A more modern preparation of the dish incorporates tomatoes.

The Piedmont region prides itself with its cattle, so our version of ossobuco at Cucina Toscana features braised beef rib, au jus, and a selection of vegetables.

Come in and warm up from the cold with a warm meal! Call us today at Cucina Toscana for a reservation.