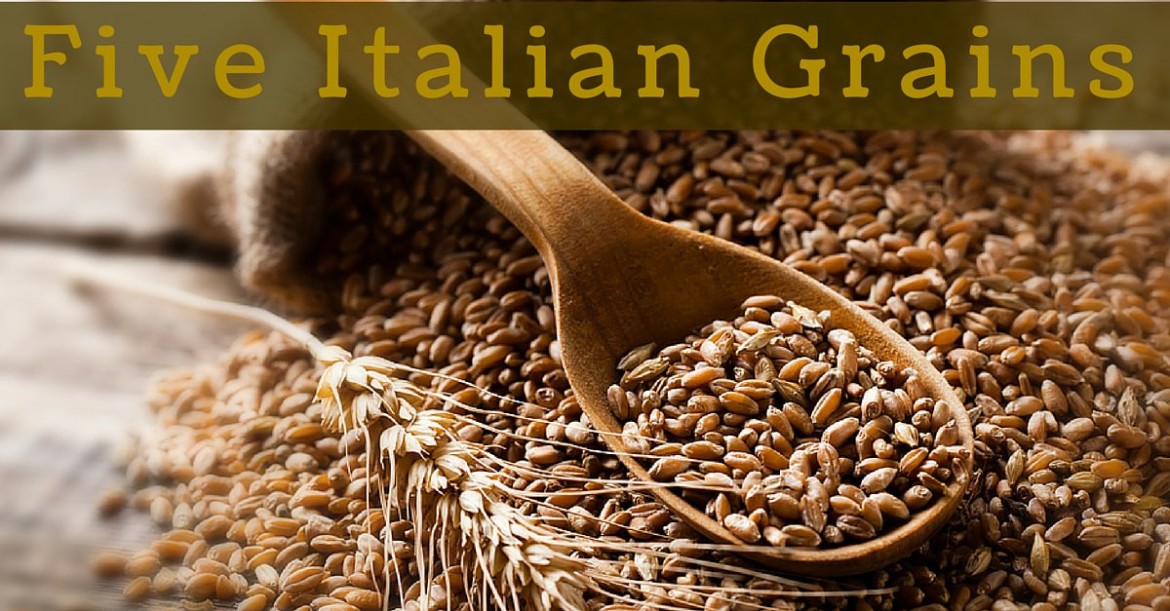 Italian cuisine has a complex and diverse history that ranges from north to south, east to west. Regional Italian cuisine depends on the agricultural production and the influence of geography, as well as inspiration from neighboring countries. At the heart of most Italian dishes is a grain, often dressed up with a hearty sauce and fragrant herbs and spices. Here we’ll explore five grains that are important in Italian cuisine.

Whole, unrefined grains are everywhere in Italian cuisine, from pasta to bread. Leaving the grain whole preserves the nutrients, vitamins and minerals that would otherwise be stripped if the grain were to be processed. Whole grains contain all three parts of the grain kernel: the outer layer of bran (which contains fiber, vitamin B, and antioxidants); the small inner germ (which contains vitamin B, minerals, and healthy fats); and the endosperm (which is rich in carbohydrates). In Italian cuisine, whole-grain pastas may be served in a variety of preparations, while whole-grain breads may be dipped in soups, sauces, or with a simple olive oil.

Though farro is an ancient grain, its popularity has been renewed in recent years. Farro boasts a high fiber and nutrient content, such as vitamin B3 and zinc. Farro is actually three grains: farro piccolo (einkorn), farro medio (emmer), and farro grande (spelt – see below). It is mainly grown in the central and northern regions of Italy, and until it became a “trendy” grain, it was used in diets of people in relatively poor areas. In texture, farro resembles brown rice and has a nutty flavor that recalls oats and barley. It is used in salads and also as a farro risotto.

Polenta is a versatile dish in Italian cuisine: it may be served as hot porridge, as a loaf, or fried. Eaten since ancient Roman times, polenta was made from a variety of different ingredients such as millet, spelt, chickpea, and farro (see above). However, in contemporary times, polenta is most commonly composed of cornmeal. Traditionally, polenta was stirred with a large wooden stick called cannella until it became thick enough to support the stirring stick on its own. Depending on the region, polenta may be served with cheese, vegetables, and meats.

Risotto is a northern Italian dish of creamy cooked rice, served with a variety of different ingredients. Commonly, it is eaten as the first course, but it has also been served as a main dish (risotto alla Milanese). Different rice varieties may be used for risotto: Arborio, Baldo, Carnaroli, Maratelli, Padano, Roma, and Vialone Nano. These varieties are preferred for their high-starch content and their ability to absorb liquids. As the rice cooks, the starch is released to create the creamy consistency preferred in well-prepared risotto. Properly-cooked risotto is characterized with an al dente texture, with separate grains.

Spelt is a type of wheat that has been used in various parts of Europe from 5000 BCE to medieval times. It is popular today as a health food item, for its high content of vitamins (B1, B2, B3, B6,folate,E) and minerals (calcium, iron, magnesium, zinc). Spelt is used in baking, for bread, biscuits, crackers, and rolls. In Italy, spelt is used in salads, while its counterpart farro (see above) is used in hot risotto-like dishes.